Abstract Based on the practical application, the article uses a series resonance method for the circuit topology of the commercial induction cooker, analyzes its different working status, and obtained the optimal switching process of the inverter power devices, theoretically calculated the relation between frequency and phase angle. The power regulation is achieved by a combination of “pulse width modulation (PWM) mode” and “phase-locked loop control”. Based on this, a series resonant inverter test prototype is built and verified the conclusion by experiments. It has a strong application background to

Commercial induction cooker has many advantages such as high efficiency, environmental protection and energy saving points, especially suitable for places that restrict the use of open fire, especially with the user awareness of its advantages is increasing, The induction heating can not only directly heat the metal materials, but also can be used for the production of the induction heating.

Induction heating can be used not only for direct heating of metallic materials, but also for

are widely used in people’s daily life [3]. However, in the actual application process, many problems are encountered. Commercial electric the inherent resonant frequency of a commercial magnetic furnace varies with temperature, load distance, and load material.

The circuit designed in this paper operates in resonant, inductive

state and capacitive state [4]. The current flowing through the load when the inverter is operating will all flow through the insulated gate bipolar transistor (IGBT).

1.1 Full-bridge series resonant inverter State 1: The system is operating in the capacitive state, as shown in Figure 1.The current is already ahead of the voltage electrical angle, so during the current change, the current is positive, but the voltage is still negative, and the bridge arm tends to be in the renewed diode tube reverse recovery phenomenon [6], which increases the IGBT loss, resulting in large inrush current, and may even damage the IGBT. Therefore, it is necessary to avoid it.

State 2: The system is operating in the inductive state, as shown in Figure 2.

The voltage has exceeded the current electrical angle. Therefore, the voltage is already positive when the current is negative, making it possible to achieve zero-current conduction of the IGBT in inductive state [4-6] is already positive, so that it achieves zero-current conduction of the IGBT in the inductive state [4-6].

From equation (1), the fundamental amplitude and rms value can be obtained respectively, i.e.

At this point, if the load resonates, the equivalent impedance is R .From equation (2)-equation (4), we get the amplitude of load current and RMS value.

Combining equation (3) and equation (6), the load is obtained from the literature [7 output power.

Similarly, the quality factor of the inverter is obtained from the literature [7]

Among the many control strategies, this paper adopts the pulse width modulation (PWM) method with phase-locked loop and phase control.

The control strategy of pulse width modulation (PWM) combined with phase-locked loop and frequency modulation control is as follows.

3 kinds, namely pulse width modulation, pulse density modulation and frequency modulation [11]. In this paper focuses on the PWM method, which is commonly used and popular in the industry.

From equation (4) and the previous section for class I half-bridge (9), equation (10), respectively and class II half-bridge type (11) and equation (12) respectively, it can be mathematically deduced that further conclude that the FM power regulation is achieved by adjusting the switching frequency of the inverter IGBT of the inverter to achieve the purpose of regulating the output power. The derivation is as follows.

The fundamental impedance and phase angle are 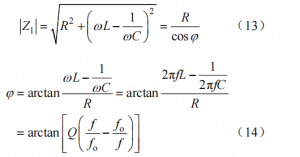 In this case, o f f , the load undergoes resonance. From equation and Eq. (15) we have

By using Masthead calculation for equation (17).The 2D curves of output power versus frequency for different quality factors Q are shown in Figure 8 shows. 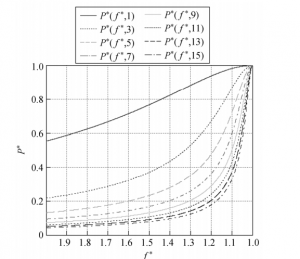 When the frequency is tuned to the resonant frequency of the load, the system works in the soft-switching state, when its output reaches the maximum power [2]. However, the

in practical applications often the load will be influenced by external environmental factors into capacitive operation, generating large spike currents that impinge on the IGBT

switch [12], which eventually leads to its failure. Therefore, this paper uses a phase-locked loop control technique to lock the load operating frequency at a slightly higher resonant frequency of the inductive operating state [11].

1.4 Software design of the control system

The design, analysis and tests in this paper show that the parameters of resonant inductor and resonant capacitor derived from this article. The parameters of resonant inductor and resonant capacitor calculated in this paper as well as the application of the commercial induction cooker designed by the control method of this paper meets the intended design requirements.At the same time, this design prototype can detect the pots and pans accurately and protect them quickly in the actual commissioning. High accuracy and fast protection, and also achieve the dual purpose of reducing induction pollution and power waste, in line with the national energy-saving and emission reduction policy.