The induction cooker sold in the market at present, the noise is 45dB(A) when using

or so, which is equivalent to ordinary indoor conversation. In order to reduce the noise, we use ANSYS, PRO / E and other software, through qualitative calculation, simulation,

The new air duct system and heat dissipation system of induction cooker were designed to achieve the effect of low noise below 32dB(A). Sound Within 20~40 decibels, quiet, like a soft whisper.

In order to achieve the desired goal, two seemingly contradictory difficulties must be solved. The first is the difficulty of noise reduction, and the second is the temperature rise of components. Noise problem is a long long-standing problem of induction cooker, fan noise accounts for a large proportion, How to reduce this part of the noise is a difficult point of the project; the second is the difficulty of heat dissipation. How to ensure that in the case of reducing noise, the components above the electronic control board to maintain

operate at a low temperature rise level is a matter of product quality, long-term reliability, and service life.This is another difficult point of the project. Fan the air volume of the machine is small, the noise is small, which leads to the temperature rise of the components; the air volume is large, the heat dissipation , the noise increases. How to find the balance between the two is the key to find the balance between the two.

The air duct makes the flow field distribution more reasonable, improves the utilization of air volume, and reduces the noise to a certain extent.

Through qualitative simulation analysis, combined with the newly designed air duct, a new fan was designed.

And the fan power is low about 2W. The new fan and air duct structure is shown in Figure 1 and Figure 2 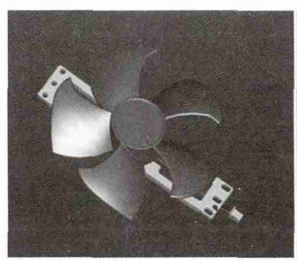 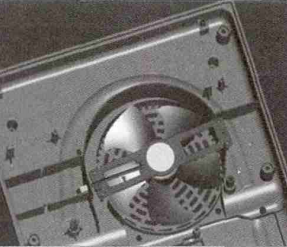 Through ANSYS simulation, the distribution of air duct flow field of the prototype machine 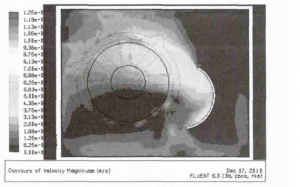 As shown in Figure 3. Compared with the simulation results of Archimedes spiral duct flow field (qualitative analysis), the distribution shown in Fig. 4 is very good.

(qualitative analysis), we can see from the distribution diagram shown in Figure 4, the new duct flow field distribution is more uniform and reasonable, the air volume is concentrated in the middle of the air duct, closer to the Induction cooker motherboard strong power area, flow through the induction cooker motherboard area air volume increased, so that will reduce the temperature rise of components in the strong power area. 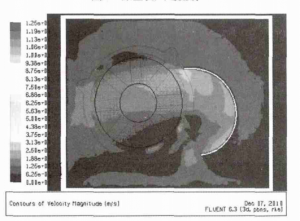 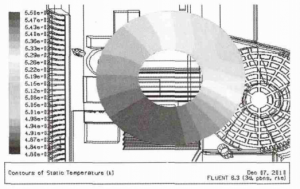 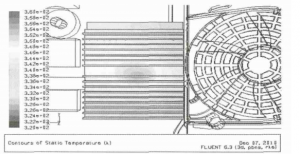 Using this program to reduce the noise of induction cooker, the Reduce the noise to about 32dB and achieve low noise The noise effect. The temperature rise of key components is kept at a low level, and ensure the reliability of the product itself reliability, performance stability and reliable quality. This study research solution can be applied to other home appliances to reduce noise pollution to improve the competitiveness of products in the market. competitiveness in the market.